The Irish Times should be hanging its head in shame today after this disgusting headline: “Two Men Jailed for Raping ‘Blind Drunk’ student in Co Donegal.”

Two men were convicted of raping a young woman, who is now in her 20s. The men, Boakye Osei (30), of Tooban, Burnfoot, and Kelvin Opoku (33), of Cill Graine, Letterkenny, were sentenced to nine years in prison for their crime. The latter of the two men continues to blither about how he is innocent, and that the victim/survivor set him up by rubbing his DNA on a condom.

The victim/survivor stated that on a scale of 1-10 of drunkenness, she was a 10 and about to pass out. Does that sound like someone who had the mental capacity to somehow rub a man’s DNA on a condom in order to set him up for rape? Not to mention the fact that the rapist is relying on an outdated, disgusting trope that sets up women as manipulative bitches who falsely accuse men of raping them.

The perpetrators in this case are foul humans. They deserve to every day of that nine years in jail.

And the foulness of these rapists makes the Irish Times headline even more repulsive. These men offered a lift to an obviously intoxicated woman and then raped her. The headline that she was “blind drunk” suggests that the victim/survivor had fault in this scenario.

The Irish Times is reporting this morning that the Dáil is in session to pass the Health (Preservation and Protection and other Emergency Measures in the Public Interest) Bill in order to give the government authority to take drastic steps to contain the virus and save the lives of Irish people. 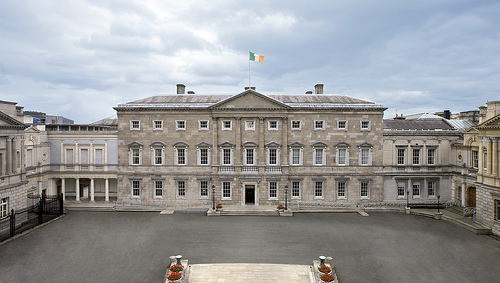 According to the paper, the legislation will “include income supports for people who are diagnosed with the coronavirus or self-isolating, and give the State powers to direct people to stay in their homes and detain those believed to have the virus who refuse to self-isolate. It would also allow for events or gatherings which pose a clear risk to public health to be prohibited, or to order entire regions into lockdown.”

I’ve seen on Twitter that many people are calling for the measures to have a sunset clause–that is, a provision that puts a time limit on how long the government has to exercise these extreme measures. I’d say that’s a good idea, but that any such provision should also include the option to renew the powers, because we just don’t know how long this crisis is going to last, and we can’t predict the course of the epidemic.

Giving the government extraordinary powers like the authority to order an entire region (say, all of Cork city) into lockdown, or to arrest and detain people who aren’t following these orders, is scary and does have a tinge of authoritarianism. Certainly, I would be frightened if Donald Trump wanted to exercise such powers because I would be afraid that he would use them against his political enemies. I have more faith in the Dáil and in Leo Varadkar than I have in Trump (but hell, I have more faith in the intellectual capacity of a gazelle than I have in Trump).

Is there another option, though? Can we just leave the people to their own devices and hope that they keep their arses inside and act collectively to protect themselves, their families, their neighbors, and, yes, people they will never meet?

I wish the answer to that question were a resounding “YES!”

But it’s not. People on Twitter and on television have shown themselves impervious to facts, science, and the heartfelt pleas of their fellow citizens. Gemma O’Doherty, unsurprisingly, is pumping out disinformation about COVID-19 that will endanger the lives of the people who believe her bullshit. And if they weren’t endangering anyone’s lives but their own, I would say, “Have at it, ye gobshites, yer only hurting yourselves, and I’m frankly fine with that.”

But people who don’t take this threat seriously and insist upon going out in public, hosting large gatherings, denouncing efforts by the government to contain the spread of the virus as fascist and Nazi tactics, as these AltShite morons have been doing, are also endangering the lives of citizens who do want to follow the guidelines, and who do want to save people’s lives.

Luckily, one of the silver linings of this madness seems to be that parents are gaining an appreciation for how difficult it is to be a teacher. Maybe teachers will come out of this as a more respected profession–and then maybe teachers will be given salaries commensurate with the difficulty and importance of their jobs.

The Taoiseach Hits a Homerun

I love using baseball metaphors when discussing politics in countries that have no interest in baseball.

Taoiseach Leo Varadkar smashed it out of the park last night with his St. Patrick’s Day address to the nation. He spoke about the COVID-19 pandemic in a fashion that was direct, honest, and compassionate. His speech was sobering, yet oddly comforting. His plan for “cocooning” senior citizens and people who are immuno-compromised is a good one, and I hope the United States takes up that plan as well.

In times of uncertainty and, yes, panic, we can all find comfort in a strong, confident leader who can articulate clear plans to help us. The Taoiseach’s stated plans prioritize saving lives, not saving the stock market or saving the fortunes of billionaires. I live in the United States, so I can tell you that this speech was phenomenal in the context of the utter black hole of leadership that we have experienced here. 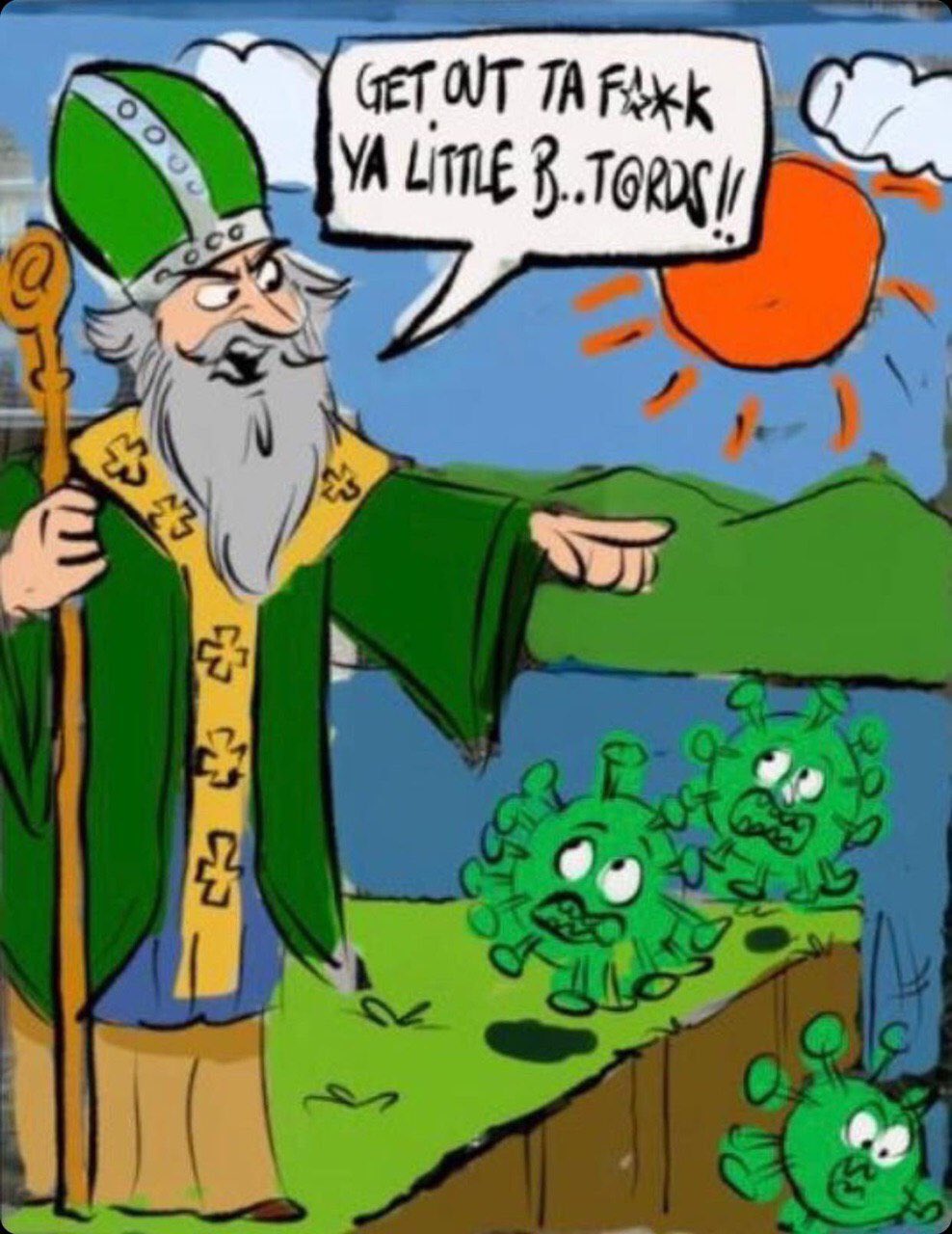 I have compiled a list of ways that we can all celebrate St. Patrick’s Day without the traditional venues of pubs and parades. Please feel free to add to this list in the comments.

The New York Times reported today that the morons in charge of the St. Patrick’s Day Parade on Staten Island are continuing to ban LGBTQ+ groups from marching in the parade and celebrating their identity as queer and Irish-American (or just Irish). Or queer and Catholic.

According to the Times, Larry Cummings, the bigoted president of the Staten Island St. Patrick’s Day parade committee, stated, “Our parade is for Irish heritage and culture. It is not a political or sexual identification parade.” He later said, “Here’s the deal, it’s a nonsexual identification parade and that’s that. No, they are not marching. Don’t try to keep asking a million friggin’ questions, OK?”

Cummings’s statements are total bullshit, though, because by banning displays of LGBTQ+ identity, he IS politicizing the event, and he IS making it a sexual display–heterosexual only. His remarks are naive at best, and pathetically disingenuous at worst. Fuck this guy.

Some Catholic officials have distanced themselves from the event, claiming that the the parade doesn’t represent the Catholic church. Good for them for not being overt bigots. But the official policy of the Catholic church continues to be to refuse to perform or recognize same-sex marriages. So, therefore, zero points given to Pope Francis for his “Who am I to judge?” remark. In fact, no points will be given until Pope Francis stands up in public–I’d prefer it to happen on Easter Sunday–and declare that God loves gays (why else would He keep making them?).

To imply, as the organizers of this parade are doing, that it is celebrating Irish culture WHILE refusing to recognize LGBTQ+ individuals AS SUCH shows a disgusting disregard for the heritage these idiots claim to be celebrating. Ireland in 2020 is not the Ireland of Archbishop John Charles McQuaid and Éamon de Valera. To the contrary, Ireland legalized same-sex marriage through a referendum in 2015. It’s out-going taoiseach, Leo Varadkar, is an openly gay Irish man. As a whole, Ireland welcomes the queer community–policies of the dumbass Catholic church aside.

This kind of attitude, as perpetuated by Larry Cummings, is the same attitude that keeps religious animosity endemic in certain elements of Irish and Irish-American society. “Irish” and “Catholic” are not synonymous. There are Irish Protestants and Irish Jews and Irish Muslims. You can be queer and be Irish; you can be hetero and be Irish. In my considerable experience living in Belfast and Dublin, as well as earning a PhD in Irish history, I can testify that Ireland has changed a lot–it is a society that values liberal individualism, and it is open to all kinds of people.

This representation of “Irish” heritage that we will see on Staten Island is an archaic manifestation of de Valera’s “comely maidens” bullshit. In fact, I would argue that de Valera’s narrow-minded idealistic view of Ireland never did exist. Statistics on sexual activity and pregnancy outside of marriage bear this out, among many other trends.

Staten Island’s Paddy’s Day parade, and Larry Cummings in particular, need to cop the fuck on. Let the LGBTQ+ community represent their Irish heritage AND their queerness in the parade.

By Laura Weinstein, 7 months ago